The exact cause of keratoconus is not known but latest research suggests that the cornea becomes weakened due to an imbalance of enzymes within the corneal tissue. Young patients produce high level of free radicals which cause oxidative damage to the cornea in absence of protective enzymes. This causes thinning and bulging of the cornea.

Keratoconus also shows some genetic predisposition. It may transmit from parent to children and affect more than one family member.

The Integrity and shape of the cornea are maintained by small protein fibers know as Collagen, which are extremely robust proteins which are distributed throughout the body and help in maintaining its structure. When these collagen fibers in the cornea become friable and damaged the cornea fails to maintain its shape and therefore cones outward. 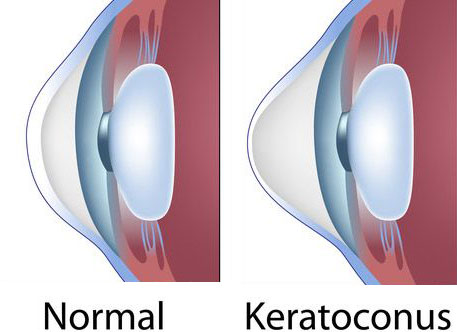 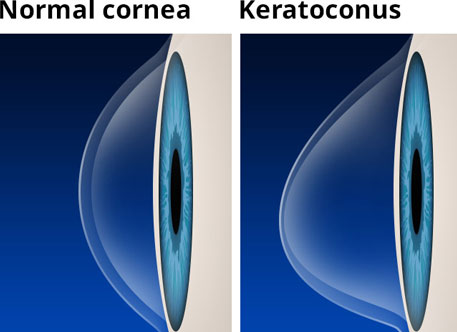 Corneal damage occurs due to the formation of free radicals which damage the collagen architecture. Free radicals are by-products of the functioning cells and they cornea is abundant in Mitochondria, which are the powerhouses of cells. During the production of energy for cells free radicals are formed which are neutralized antioxidant substances in the body, yet if there is a deficiency in antioxidants which may be due to reduced production within the body or reduced intake by means of antioxidant rich food, will lead to free radical damage to the cornea amongst other body structures.

Keratoconus can be an acquired condition but an entity known as Familial Keratoconus has been described in literature in which it states that certain individuals with a significant family history of keratoconus in direct relatives have a greater risk of developing the same condition. Since keratoconus is a very slow progressing condition which in some cases do not lead to significant compromising of sight most individuals are undiagnosed in the population.

Irritation of the outer aspects of the eye is one of the causes of keratoconus. The conjunctivae which are the outer linings of the eye lids are prone to become infected. A commonly known disease entity known as Conjunctivitis where there is reddening, inflammation and irritation of these outer covering of the eyelids causes itchy eyes in most individuals. Also any foreign objects such as hairs or dust particles or some cosmetic products can also cause irritation of the eye. Irritant eyes become progressively itchy and due to this there is friction damage to the sclera and cornea.

Ultraviolet light poses a great danger to the cornea and the lens of the eyes. The most potent source of natural Ultraviolet light is sunlight and individuals who have prolonged exposure to sunlight such as police officers, construction workers and members of the armed forces have a significantly high risk of catastrophic damage to the cornea.

Another source of irritation of the cornea is the use of loose fitting incorrectly positions inferior quality contact lenses, some of which are sold over the counter for cosmetic purposes. These cause irritation of the conjunctivae and eye which in turn leads to the attraction of infections to the eye which will damage the cornea.

Individuals more prone to allergic reactions, such as Asthma also have an increased risk due to allergic inflammation of conjunctivae leading to itchy eyes causing friction damage to the cornea.

Ojas Eye Hospital A Center of Excellence for C3R with Intacs implant in Mumbai, India.